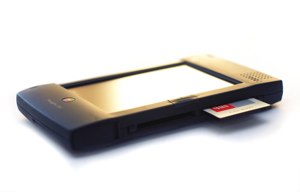 First thing’s first, Newton MessagePads simply are not up to Apple’s standards of today in terms of design and build. A coworker described me holding it as looking like I should work for UPS. That said, the design is very functional, and has its own retro charm.

Steve Jobs once said “[Design] is not just what it looks like and feels like. Design is how it works.” The Newton may be from the era of his hiatus from Apple, and he may have been the one to kill it off, but it succeeds in this manner. The width is perfect to be able to hold the device in one of my admittedly small hands, and write with the other. Palm may have bested Apple in PDA sales at the time, but the extra size really is quite functional for the intended office use. 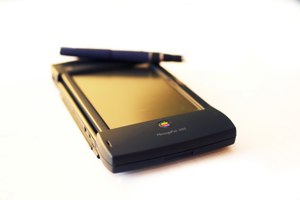 This one is actually rather shocking to me. I’ve used Inkwell on OS X before, the handwriting recognition of which is said to come directly from the Newton, and been quite impressed by that. However, on an actual Newton, my accuracy is far greater than using my Wacom tablet with Inkwell on OS X. After a few minutes with the device, my accuracy became nearly perfect.

I think there’s an important note to be made here about the potential of handwriting recognition. When I hear the topic brought up, people often say it’s pointless as one can type, even on today’s smartphones, faster than one can hand write. This statement is true, but misleading. I can certainly type on my iPhone slightly faster than I can write on my Newton, but there are differences. For one thing, my thumbs get unhappy with me fairly quickly if I’m typing away on my iPhone. I simply don’t have the same stamina I do as with handwriting. Secondly, Newton’s pen-based input is still superior for moving text and formatting documents to the iPhone, though this issue I suspect will be more easily resolved. 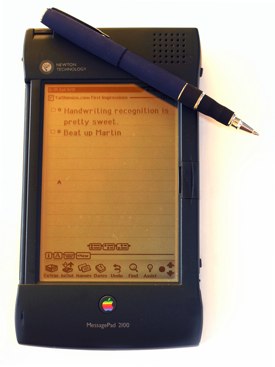 The Simpsons once lampooned the Newton having it read the note “Beat up Martin” as “Eat up Martha” when taken by school bully Dolph. I’m happy to say I had no such issues with that phrase. 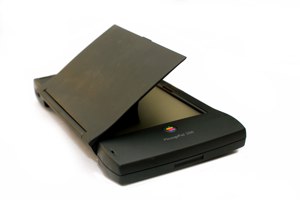 The UI of the Newton feels saturated with innovation, even when compared to new devices. The idea of the notepad being the centerpiece of the device is not only vastly different than current UI paradigms, but extremely useful due to the addition of the assist functionality.

To schedule a meeting, I don’t have to go into the excellent Dates application (though I can), I simply write “Meeting with Shelley”, select it, hit the assist button, and it creates a new meeting in the Dates application. Not only that, it pulls in Shelley’s information from my “Names” address book, and lists her as attendee. If I am in the dates application, I can simply write in the title for a meeting where the time it will happen is displayed, and it will put it then. There’s no need to enter a separate screen to create a simple event. Things work, and they do so intuitively. 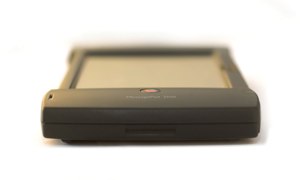 Though I am going to be using my new Newton over the coming months in real-life use for calendaring, notes in meetings, and GTD, it was EOL’d over a decade ago. With recent rumors of the inevitability of a new Apple device of similar size in the works, the future looks exciting. I’m sure Apple’s new device will be brilliant, excellent for browsing, media, and mail, but I can only hope it matches the Newton at the organizational tasks it does best.

If you're interested in Newtons, the Newton Poetry blog has Newton News, and maintains links to good resources on the subject.

I just picked up a 2100 for doing some “real work” recently, myself. I’m loving this thing!

to think of what could have been had the project continued, had Apple been able to sell them for cheaper etc. The interface is just simple and brilliant.

Glad to hear you’re enjoying it!