The Long Road to Pro Part 1

At this time last year, Apple had just begun reviewing iPad apps for the store. I had begun working on Filterstorm as soon as soon as the SDK was available in January, and at that time was nearly ready for submission — or so I thought.

For a long time I had wanted to write an iPhone app, but never really knew what I should do. iPad was different. The moment I saw it I wanted to write the definitive photo editor for it. It was my first iOS app and my experience with Cocoa on Mac was limited to personal projects, nevertheless I continued with my lofty goal. I submitted Filterstorm to Apple, was approved on March 31, and was live on April 1 (iPad was released on April 3).

It’s hard to overstate how stressful that month was. There were a number of memory problems that didn’t manifest in the simulator, and the speed was much, much worse than I had expected. I worked as hard as I could to fix everything. The 1.0.2 update was released onto the store just 2 days after I got my iPad. Version 1.0.3 made it onto the store 5 days after that, and 1.0.4 followed only 3 days later. Things had massively improved by 1.0.4, and I allowed a bit more time to elapse before version 1.1 was released — the first to contain new features. 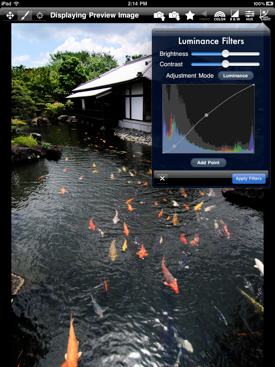 A year later it’s mind-boggling to think that I was working a full-time job and had 5 releases on the store in a single month.

The next few months brought several more feature updates including gradients, a price tag, and an increasingly over-crowded interface that hadn’t made much sense in the first place. Despite all this, I firmly believe Filterstorm was the most powerful photo editing app on iPad, and I had the immense pleasure of getting featured in staff favorites (80,000 free downloads) and a flattering writeup from Mac Life.

It was around this time that people started talking to me about IPTC information. Captioning was first an option in 1.4, which also brought email and FTP support. I liked the idea of Photojournalists using FS to transmit images from the road, but at this time I was busy thinking about how to make the interface clearer with version 2 and I was still working a full-time job. That market wasn’t — and couldn’t be — my real target at the time. 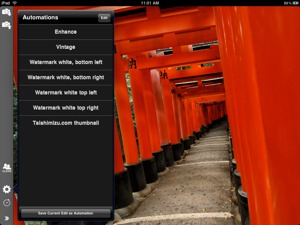 Version 2.0 was released in mid-August. It brought the now-familiar basic interface layout (the drawer), large image reprocessing, and automations. It was met with mixed reactions; the new interface was clearer, but also took up more space, especially as controls for curves, hue, etc. appeared within the drawer rather than floating HUDs. It wasn’t very pretty, but it was much more capable.

I immediately started working on the iPhone version after 2.0 was done. The iPhone market was crowded, but everyone wanted an iPhone version, myself included. I had a lot of trouble scaling the interface down to the tiny screen, and while I am extremely happy that I was able to maintain all the features from the iPad version, I’ve never been very satisfied by how finicky it is on the tiny screen.

This was, though, the proverbial straw to the camel. I had been making slightly more money on Filterstorm than at my job since it launched, but money from iPhone sales turned the security of my day job into a liability eating away at my programming hours. I gave notice a couple weeks later, on October 1, and worked my last day on October 30.

By this time I knew I was going to write Filterstorm Pro. My original goal with Filterstorm was to make the definitive iPad photo editing software. With the iPhone version out — and after several conversations with photojournalists — I expanded that goal to encompass mobile photography workflow.

My first month of freedom was spent making sure that everything was working well with the regular version so that I could concentrate on FSPro with a minimum of distractions. With that out of the way, (and some time off to work on Light Compressor), I was finally able to concentrate on Pro.

I was originally going to write this all in one chunk, but that took longer than expected. Tomorrow (hopefully) I’ll post about the development of Filterstorm Pro.

Next Entry: The Long Road to Pro Part 2

If Ed Dale is giving you a thumbs up you must have made an impression in that iPad 2 line in NYC, and we will be looking into your iPad app ASAP

I’m happy to provide review copies if you email me about it.