A bit over 2 years ago I wrote Filterstorm to be the photo editing app I wanted to use on iPad. I wrote Inkist for similar reasons. I own Photoshop, Painter, and SketchBookPro, have used all of them with my drawing tablet (a Wacom Cintiq 12WX), and to some extent I like each of them, but each also has its annoyances, and they aren’t cheap. Since fixing them isn’t something in my power, I of course went out to create my own app to satisfy my needs. 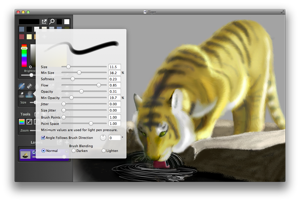 My top priority with Inkist was brushing. Brushes had to be responsive, easily configurable, and respond well to pen pressure. I spent a lot of time going back and forth between Inkist and SketchBookPro to make sure brushing compared favorably as the whole endeavor would have been useless if it didn’t. Since the back end of Inkist is shared with Filterstorm, this was the majority of the work outside of the interface.

I hate it when apps have too many floating windows. I don’t mind having one, it can often be very useful, but I tend to like most tools to stay within the primary window. All of Inkist's tools are contained on the left side of the window, grouped into four palettes. Colors, Brushes, Other Tools, and Layers. Any of the palettes can be popped out into a HUD style panel, I tend to pop out either the color palette or the layers (or sometimes neither if I’m working on a flat image like the tiger image above).

I spent some time experimenting with different sizes for the buttons within the palettes trying to find the right balance between a button large enough to be easily clickable using a pen (it’s easier to hit small targets with a mouse), yet small enough so that the palettes don’t get too big when they hold lots buttons. I ended up settling on 30x30 buttons, which I believe is slightly larger than Photoshop uses, but similar to Pixelmator.

Like Photoshop but unlike SketchBookPro, the four brushing modes (brush, erase, blend, line) all share the same set of brushes to choose from, though each may have a different brush selected at any given time. I chose a different route with the blend tool than SketchBookPro, too. I believe SketchBookPro creates a blurred copy of the entire layer, then uses masking to reveal the blurring, similar to how Filterstorm works. Inkist's blend tool calculates the average color under the the brush and sets that to the brush color. The advantage of this is that if you go over something many times with the blend tool, it’ll get more blended each time, it’s also possible to use it to create less smooth blending when stylistically appropriate. That’s what I did to create the fur of the tiger in the picture above. Smooth blending can still be accomplished by using a brush with low opacity/flow. 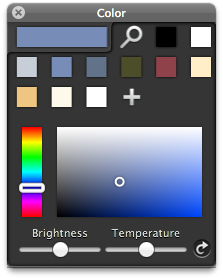 The color palette was actually the catalyst that got me to start writing Inkist . I used to have a tendency to put several shades of the same color into my color palette, switching between them in order to do shading. One day I thought “Wouldn’t it be nice if I could just keep the mid-tone in the palette and use a slider to get different shades?” A few days later I started programming. The brightness and temperature sliders will change the brightness/temp of every color in the palette including the currently selected one, and it does so non-destructively so you can just hit the reset button on the side to get back to normal. It was a simple feature, but one I find fantastically useful.

Inkist was submitted to the Mac App Store on Saturday, May 5, and will sell for $9.99. It’s a 1.0 release—there are certainly areas that need improvement, and features that need to be added—but I think anyone who enjoys digital art will enjoy it.